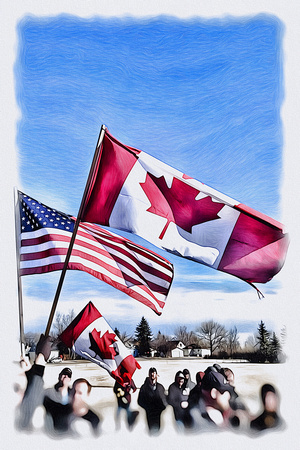 In March of 2020, a group of us watched from the mountain village of Hakuba, Japan as the world began to fall a part. We heard news reports of death and despair, food stores being emptied out, and toilet paper on high demand. At the time, many of us didn't know what to make of it, but we remained in our container of light and love until we all made our way back to our various parts of the world. Fast forward two years, TWO YEARS, and the people finally had had enough.

Nothing ever felt right about this whole thing. From the time I was kicked off the beach as I collected my thoughts alone, to the time I received a warning for being in the forest alone. They offered you cheeseburgers, alcoholic shots, weed, doughnuts and the hope of returning back to normalcy. They named it operation warp-speed and told you that it was all for your own good. It went from 15 days to flatten the curve, to 2 years of obey or be outcasted. Then with the thunderous sounds of exhausts and booming reverberations of air horns, the tides began to shift.

I don't remember when I first caught word of the Canadian trucker convoy protest in Ottawa, but from the moment I began watching the live feeds of regular citizens on the streets, I was immediately hooked. I watched for days as Canadians danced, sang, picked up trash, shoveled sidewalks/streets, shared their individual stories and peacefully protested. A far cry from what the local news stations were reporting. They took their cue from the prime minister Justin Trudeau who called his own people misogynist, racist, homophobic, a small fringe minority whose views were unacceptable and didn't portray the feelings of all Canadians. Terms such as nazis' and rapists' would later pass through the mouths of government officials. He liked to word vomit the number of 90%. He adamantly said that 90% of his nation was vaccinated, much like our own president Joe Biden likes to say that 75% of America is vaccinated. I wonder how many people got vaccinated, because YOU promised them a return to normalcy! Because YOU promised them safety! Because YOU promised them security! Take a poll now and let's see how many regret their decision!

Living in Montana, I was just under 5 hours from the Canadian border. Since I couldn't get across the border due to my vaccination status, I began to search facebook groups in the hope that a rally would form nearby. Unbeknownst to me, a blockade had been set up in Coutts, Alberta in support of the Ottawa protest. I would eventually find a group who was putting together an event in Sweetgrass, Montana in support of the Coutts, Alberta blockade. I made the journey north not knowing what to expect. What I saw, was every race, every age, and every gender show up to something, where like it or not, were all fighting for the same thing. That thing being freedom of choice! For someone to see a young boy driving a toy truck around with a big smile upon his face call this something that it wasn't, will forever boggle my mind. To speak to an eighty year old couple who told their kids they were coming south and didn't know when they'd be back spoke volumes. To watch a US citizen later on in the day hand over a freshly baked lemon meringue pie to that elderly couple could've brought you to tears. Separated only by a plastic chain linked fence, I witnessed friends/families being reunited after two years, hugs being shared, a horse brigade march in, a cop tossing a football around with some young children (who also stated he wished he were on our side), as well as conversations and handshakes that won't ever be forgotten. Unfortunately the blockade was peacefully broken up after the weekend, but not with-out a lot of momentum. 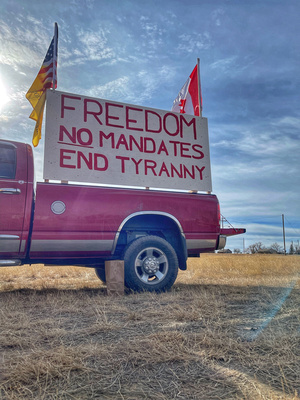 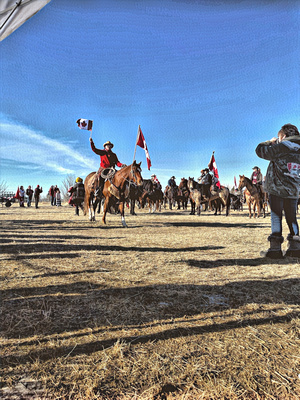 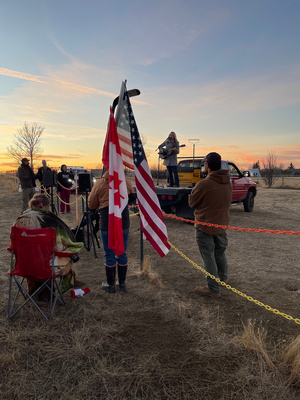 A few days later, Trudeau sent in his mercenaries to violently bring the Ottawa protest to an end. My focus then began to turn towards the various trucker convoys forming here in the states. The rhetoric being spoken about in Canada was beginning to trickle its way down south. The mandates began to lift, the noose was being loosened, and the government was beginning to scramble. All in the name of science though correct? Then Russia invaded Ukraine! Just as quickly as I began to focus on that story, I just as quickly pulled my focus back to matters at home.

I had met a beautiful soul at the border, who mentioned she was putting together a rally for the Northwest convoy originating out of Spokane, Washington which would make its way through Belgrade, Montana just two weeks from the date we had met. I knew immediately, it was something that I had to be a part of. I spent my first few hours at the event directing traffic to their individual parking spots. As the masses were congregating at the Flying J truck stop, I saw adults, children, veterans, horses and dogs all coming together. Night-time fell, and the convoy had finally arrived. I immediately wanted to jump in my truck and follow behind for part of their journey, but I didn't and it's a decision that haunted me for a few days after. 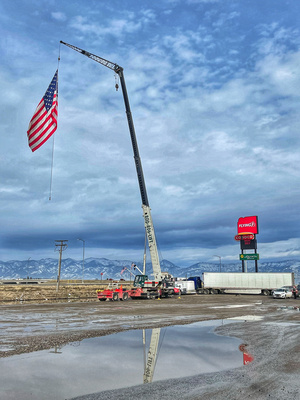 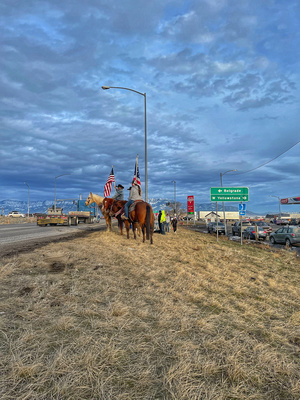 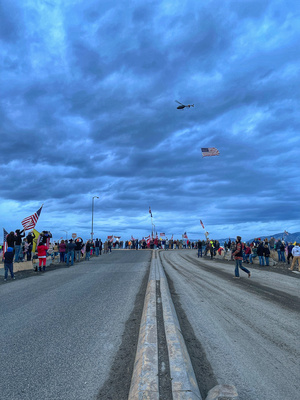 My mom often jokes with me that I was born in the wrong era, and I used to agree with her on that, until now! Would I have fit right into the late 60's/early 70's? Hell yes! Woodstock? Yes please! But who knows, maybe I would never have been given a chance to speak up or out. Maybe I would've been sent to Vietnam to fight a battle that should never have been fought. Maybe I would've been silenced forever! I'm lucky enough though, to have been born in 1980 and here I am in 2022 speaking up and out about something that's never felt right. The next day I would pull ahead of the convoy just outside of Billings Montana and find an overpass which was filled with trucks, flags, and people all supporting the same cause, freedom of choice! I wanted a moment to myself though, so I drove another 20 minutes east and found an over pass with no one upon it. I reflected on my weekend spent at the Sweetgrass, Montana /Coutts, Alberta border. I reflected on the night prior as I watched the Northwest convoy and a community come together. I reflected on this very moment, while waiting for the convoy to pass and trucks not even a part of it acknowledging me from down below. Finally someone showed up with an American flag. Then a mom showed up with her son and her mother. We stood and waved as the convoy made their way to their final destination. A brief moment in time when I truly felt alive.

Whatever fight you're choosing to fight these days, I see you and I acknowledge you. Keep fighting for whatever you believe in, but don’t ever forget the shit show from the past two years. The lies, manipulation, and coercion all brought about by a corrupt system. A system that very well may have overtaken us, had everyone just remained silent. 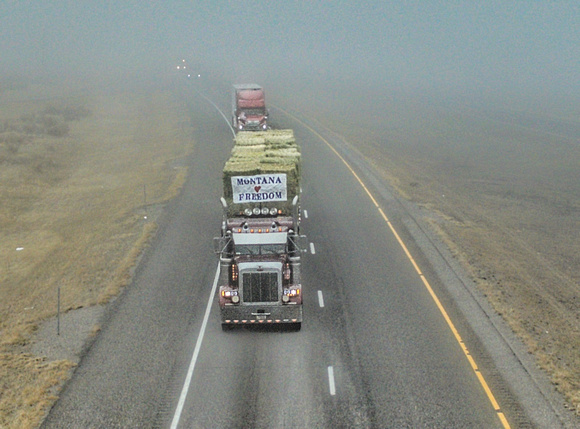 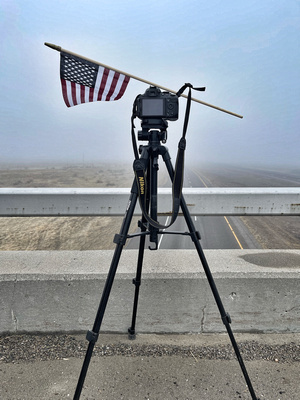 For more inspirational tales, thoughts and photography visit me on instagram: @ryan.j.drewes

Be sure to subscribe to my EMAIL list so you can receive photos not published in my blog posts, updates on new fine art photography prints listed for sale, and news that that non-subscribers won't receive. You can subscribe by clicking the link here: Subcribe.

Monty Shows(non-registered)
Although I disagree with your sentiments about the Viet Nam war (I am a vet), I wholly agree with FREE WILL and this convoy, as long it stays non-violent, is for that free will. It is up to those of you who make up this convoy to police your ranks and keep it a statement for freedom not of hate and division. I have been a conservative my entire life, but I have little use for racists, bigots, anarchists from the right or left. The fight is for our God given right to FREE WILL.
Carolyn(non-registered)
Thank you for sharing. I pray our nation unites, realizing the lies told and sees the media's propaganda.
Roy(non-registered)
Wonderful story. Thanks for sharing.
Tina J Nicholson(non-registered)
I to was at Lockwood. We got there at 6pm. The convoy was late, but I got to watch all the Patriots pull in and wait with me. It was amazing! Please reach out to me if other things are in the works, and you need a very patriotic hand from Northern Wyoming❤
No comments posted.
Loading...
Subscribe
RSS
Recent Posts
Behind the Lens #4 ~ Countryside Art | North Dakota Photography | Barn Art Behind the Lens #3 ~ New Jersey Photographs | Beach Sunrise Pictures | Wall Art Beach House Behind the Lens #2 ~ Flathead Lake in Montana | Montana Wall Art | Blog on Life Behind the Lense #1 ~ Ousel Falls | Waterfall Art Mary Ann (two words no E) | Blogs About Life Experiences Sometimes You Just Need To Break Away | Self Healing Hiking Lake Mead | Ghost Town Near Las Vegas Hiking Valley Of Fire | Things To Do In Vegas Besides Gamble Lake Mead Echo Bay | Things To Do In Vegas Besides Gamble Lava Lake Montana | Bozeman Hikes | Things to do in Big Sky Montana
Keywords
fine art photography print landscape photography prints blog on life blogs about life experiences art prints photography montana landscape photography blogging about my life things to do in vegas besides gamble valley of fire state park new jersey coastline
Archive
January February March April May June July August September October November December
© ryan.j.drewes
Powered by ZENFOLIO User Agreement
Cancel
Continue