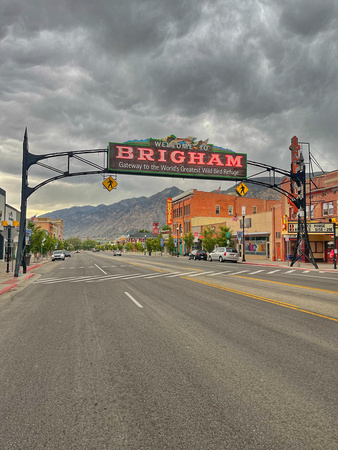 Brigham City, Utah, lies nestled along the western slope of the Wellsville mountains. With its main street lined with a variety of mom and pop stores, Brigham City has a real yesteryears American feel to it.

What led me here, was my participation in my second live art show appearance. Having cancelled three previous shows due to the unpredictable Montana weather, I was overly excited to get in my truck and make the four and half hour drive south. With gas prices surging, I knew I more than likely wasn’t going to make a profit, but right now I’m more focused with getting my name out there and having my work being seen. 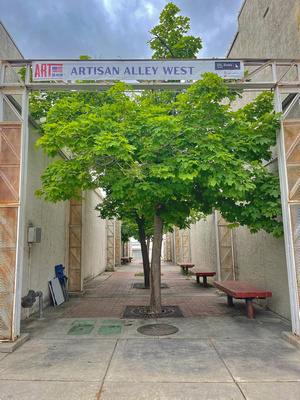 Day one brought sunny skies and 80 degree temperatures. My arrival was met with some confusion, as they had another person marked down for the spot I was told to occupy. In fact, when the listing of vendors was brought out, my name wasn’t even on the list. I laughed and thought to myself, “what a surprise!” They’d eventually move me from artisan valley east to artisan valley west, and so my weekend officially began.

I’m learning terms in the art world rather quickly, and with the variety of things I create, I fall under the category of mixed media. For this show specifically, they wanted me to focus just on my photography. I was more than happy to oblige. I set up my table at the end of the alley, and began to catch up on some work. Across from me were two elderly ladies, Mary Ann (two words no E) and Joy, who were lovely to speak with. Joy was nice enough to purchase a print off of me. My first sale of the weekend from a fellow vendor. The name alone says it all. Next to them was a spicy latin woman from Florida. Currently residing with her mom in Utah, we also shared conversations about our whereabouts and creations. The day started off extremely slow, but it was just nice to be outdoors soaking in the warmer temperatures. People strolled the alleyway which only held four of us, but we all kept ourselves occupied the best that we could. It wouldn’t be till later in the day that I gained some traction. I made a few sales, shared some really nice conversations and wrapped it all up by 7pm. I grabbed a pizza afterwards, headed to a truck stop and called it a night.

Day two brought the rain, so the vendors from both alleyways moved indoors. Twelve of us brought together into one studio. Again the day started slow, so we all got to browse each other’s tables. To the left of me was a man named Thomas. He sold rocks and stones collected over the years and carved them into hearts. His mission, to bring awareness to suicide. His story was very heartwarming. To read more about his business click on the link here: Take Heart Creative Studio. 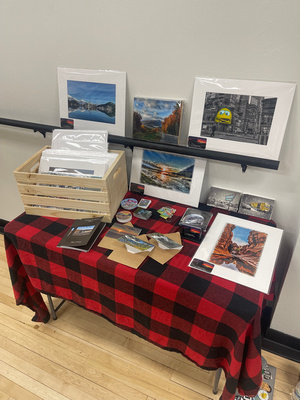 Mary Ann (two words no E) whom I mentioned earlier in this post, had sought me out and wanted to buy one of my books, Wandering for Words. Want your own copy? Click on the link here: Wandering For Words. I guarantee you that something in there will make you think! Having perused it the day before, she said she could’t stop thinking about it over the evening and that she needed to purchased it. She wanted me to sign it, just in case one day I made it big. Kind words from a very kind soul.

Once again I began to make some sales later in the day. I took notice of what people were drawn too, as well as the conversations we were having. My artwork was received very well, and I really was taken back by the amount of people who shared their thoughts and words with me. It was much needed, as I was struggling mentally with some things the previous weeks leading up to the show.

For years I’ve been banging my head against a wall trying to promote and sell my creations on social media. All I hear are crickets though, and if I’m being honest, I was allowing it to destroy my self worth and joy. Call it a hunch, but something was nudging me to get my stuff out there in person. That same nudge that told me to stop drinking, that same nudge that told me to head west, and that same nudge that continues to tell me to keep going. I feel like my creations are more one on one, than sell to the masses, so I figured I’d give it a try. Not only am I facing my fears of having to converse with people face to face, but I’m also continuing the art of putting myself out there.

While monetarily I took a loss for the weekend, when I look at the overall picture I see a profit. I made some sales, handed out business cards, made connections, met some beautiful individuals, got to visit a new city, and grew just a little more inside. How do I know? Well when the thought of camping out for the night crossed my mind, I remembered that I had a responsibility to get back to in Montana, my newly adopted puppy. I began the four and half hour drive back with a smile on my face and thanked the universe. I looked up to the sky and said, “thank you, I really needed that.”

This photography shot of Union Pacific engine number 1851 is for sale in a variety of sizes and products. Click on the photo to learn more.

My last post entitled, Sometimes You Just Need To Break Away, dives into the topic of taking a break from Instagram. I left the platform for nearly a month, because I was allowing it to sink my self worth. Read more about it by clicking the link HERE.